Undefeated WBC Heavyweight champion of the world, Deontay Wilder, has vowed to surpass his “idol” Muhammad Ali by knocking out Tyson Fury on Saturday night in Las Vegas, while saying his fight with Fury could be bigger than Mayweather’s money spinning fight with Manny Pacquiao in 2018. 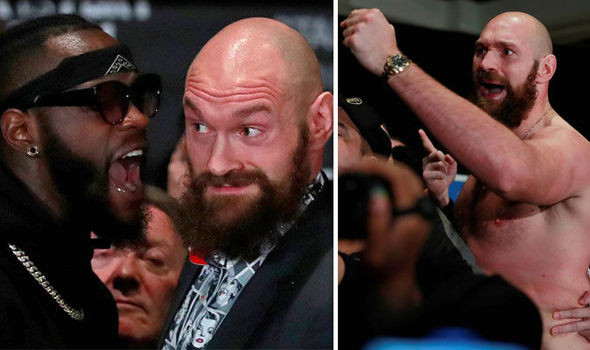 Fury and Wilder fought to a much criticized draw in December 2018 as Fury won 10 rounds but was knocked down by Wilder in 2 rounds causing the judges to label the match a draw.

The 34-year-old American Wilder would trail only the likes of Joe Louis, Larry Holmes and Wladimir Klitschko on the list of heavyweights with the most consecutive defences of the world title if he beats Fury even though the British boxer promised a knockout in Saturday’s rematch. Muhammad Ali has a record of 10 consecutive defences of the heavyweight title, same as Wilder..

“It will be an amazing feeling, my 11th consecutive defence,” said Wilder. on Wednesday.
to the 5 Live Boxing with Costello & Bunce podcast.
He added: “It was a basic plan for me to get into boxing, become a journeyman and make a few dollars for my daughter.

“I never thought about being heavyweight champion of the world and being tied with my idol Ali.

“Once I’ve beaten Fury with a devastating knockout, I will go on even further to break the record and do more amazing things.”
Wilder then went on to claim his fight with Fury is bigger than Mayweather vs Pacquiao’s fight.

“It’s been tough being here in America when your sport is not top of the podium,” said Wilder, who is undefeated in 43 outings.

“One of my guys described this as like a Floyd Mayweather v Manny Pacquiao fight because of all the calls coming in for tickets. It’s bigger.

“It made me feel good – but I have to keep my head, stay focused and deliver on Saturday. This is what I have always wanted and my moment in time has come. It took a long time. I can smile and say I will not disappoint come Saturday night.”

Snotsicles and snowdrifts
Drone disrupt flights at Changi airport, Singapore
Teachers with professional certification from (TRCN) would be used to replace the ones that would be...
Youthwinconnect