A primary school teacher, Idris Dangana, was touched by the death of a woman from breast cancer and decided to invent an affordable device to help with early detection. 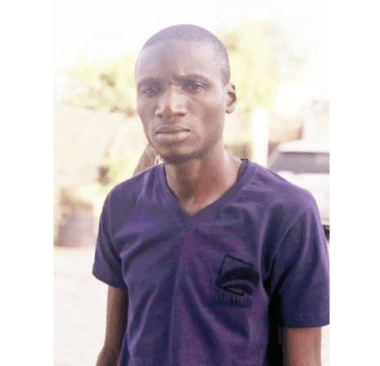 Idris Dangana, 43, was unfulfilled with his life as a teacher in a primary school and decided to quit and develop his interest in learning computer and software development skills

The Kano native confessed his challenges to a friend, Isah, who had just returned from Burum Burum Village in Kano, where a woman had just died from breast cancer.

News of this death brought back painful memories for Dangana.

“I was touched by the story and it reminded me of the pains I saw my senior sister passing through when she had breast cancer. Luckily, she survived it,” he said.

“The worst nightmare was when I was driving and saw a woman under the sun holding a hospital card, begging for money for surgery on one of the breasts, which would cost her over N150, 000. She could not wear clothes and used a veil to cover her upper body.”

That spurred Dangana to take his mind off his disappointing experience as a teacher to consider ways of preventing deaths from breast cancer.

Considering the local prevalence of cancer, generally referred to as ciwon daji in Hausa, Dangana, a graduate of Physics Education, felt there was a need for urgent intervention, especially on behalf of rural women.

“For many, they could not afford the cost of screening because there are no screening machines in primary healthcare centres,” he said. “It cost between N3, 500 to N6, 000 to get scanned in cities.

“This cost, plus transportation feeding and sometimes staying over for a couple of days if they could not be screened on that day, they need an average of N15,000 to N25, 000 to stay and get scanned. Surgery costs above N150, 000. Not all hospitals are equipped with mammography machines as it cost about $60,000.”

What if there is an easy and affordable means of detecting breast cancer early, he asked himself? How many lives could that save?

Dangana started researching this question and set up BCScan, an innovation of the DiceHub (DIHub), which is behind the cancer-detecting device they would later come up with.

He was soon trying out different models and algorithms and they had to think of the best possible way to go about it, alongside doctors who collaborated on the project.

“We joined hands and talked on possible partnerships with a local NGO on breast cancer, we deepened our search about this deadly cancer by asking as many women in our network, including healthcare professionals. The feedback was scary,” he said.

Their solution was a brassier, fitted with Artificial Intelligence, that could detect tumours that are as small as 2mm in diameter.

The wearable device would guarantee early detection, Dangana said and is especially targeted at women in rural areas with limited access to health care and the prohibitive cost of mammography.

However, mass production of the device is the next challenge for Dangana now.

Not finding the capacity to mass-produce in Nigeria, Dangana decided to seek collaboration abroad.

“We out-sourced to India and China to get the materials that we will use for manufacturing the cancer-detecting device produced,” he said.

For Dangana, the cost of the device is essential because of the type of people, low-income earners, he is trying to reach with it.

Now, he said, women can be tested for as low as N1, 000 if the device is available at primary healthcare facilities, private hospitals nationwide. Those who want a personalized device would have to cough up N15, 000 – N25, 000.

With his set up in place, Dangana is looking to mentor more young people to make impacts in their communities.

“I am passionate about making an impact in my community and shaping the minds of the younger generation. I learnt through the hard way and have seen how lack of mentorship had caused me a lot I could have achieved if given the right pointers,” he said.

Though his idea is global, he is desirous of immediate local impact.

“It is evident that the gap is too wide between Africa and the rest of the world, particularly Nigeria and the northern region to be precise. Though we are still learning, I believe over time, the impact could be felt and will serve as a wakeup call to many to co-join and change the narratives,” Dangana said.

Dangana is particularly concerned about the challenges and gaps, especially in the technological and innovation space, between the north and the rest of the country.

“The talents are very limited and scarce and where available they lack access to the right network that can scale innovations,” he said. “I saw a big opportunity (teaming youth) that if well utilized and given the right skill set, environment and mentorship, we can turn our communities, homes and country to an innovation space where lots of skilled labour and disruptive start-ups emerge.”

If Dangana’s device is approved and is widely available, one can only imagine how many lives it could save.